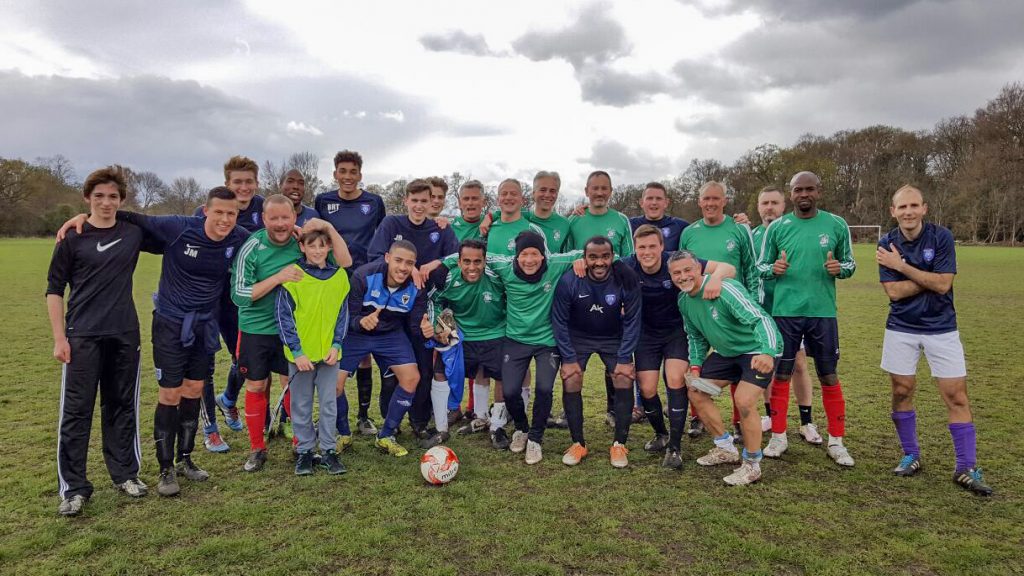 The sun was beaming;  the grass green (in patches) Palewell common the venue. The managers lead by Julian Groves looked focused but slow and uniformed in their bogey green kit; the coaches orchestrated by head coach Michael Morgan.

With the managers wanting to keep their 100% record intact; coaches needing to prove a much needed point the afternoon was set. Making their debuts in the coaches line up saw Craig along side newbie aka Bruno in central midfield, in goal Alex ‘Jedward’ Salt and James on the right side. Blaire coming in for the coaches when needed as he done for us ever so well on Saturday mornings to coach. Sinan dusting off his boots to play on the left of midfield.

The wise words of head coach was to win win win or lose your jobs. Kick off in full swing managers were not sure what they were doing on the pitch, no afternoon stroll as the coaches set a high tempo to break down a wall of 11 men.

A well worked goal landed at James’ feet driving a shot low and hard into the bottom left corner, keeper was left feet rooted to the ground as he waved the ball passed him. Managers with their pride diminishing made some changes and stopped cheating playing with 12 players on the pitch, drew a goal back; 1-1

Hitting us on the counter attack the coaches remained playing the ball around finding big holes to play the ball into, Craig came up with another well worked goal making it 2-1, cries of Steven Gerrard with the finish

Experience kicked in, managers using their physical presence to try and win the ball and play, a few niggles and late challenges saw the game being slowed down to their tempo, walking pace. Enough was enough the big man Julian Groves entered the frame, sporting his new haircut especially for the game… IT MADE NO DIFFERENCE.

The coaches made it 3-1, Blaire giving the keeper eyes, taking it round him with a look of embarrassment with the finish as he rolls the ball into an empty goal

The managers slow to get back getting caught offside by the excellent and superb defending of central defenders Sam and Abs. Helped by Joe and Steven playing on either flanks respectively

Taking a run up the pitch, Abs made it 4-1 with a worldie on the edge of the box. A quick 1-2 with Craig capped off a great performance by the coaches.

The managers finding something in them made it 4-2 with a consolation and pride goal.

The whistle blown! Winners, an emphatic win for the coaches, beating Julian’s managers. A win that has now been placed in Sheen Lions history books. A win that the managers won’t be happy about, losing their crown not knowing if they’ll ever get to see it again.