Congratulations to Sheen Lions U18. With an emphatic win on Wednesday 1st May they secured top spot to win the U18 Premier Division of the Surrey Youth League. Another big win on Sunday 5th May in their last game of the season gives them a five point winning margin.

A great finish for their Manager John O’Brien and many of the squad in their last season with Sheen Lions after so many years.

Here are some thoughts from

Sheen Lions U18’s are Premier League Champions 2012 -2013. We won 16 of our 18 games. Losing only twice. We won by 5 clear points. We have the best defence in the league conceding only 20 goals and scoring more than any other team 69.

I started this team 12 years ago when the boys were 6 years of age. They are now 18 year old young men. Remarkably we have 4 players from the original team, Charlie O’Brien, Matt Hopwood, Mark Brown & Declan Ryan. Charlie,  Matt & Mark have 12 seasons of uninterrupted service. It is a fairy tale ending to finish as league champions in our final season together.

I must thank Sarah Street for her support, advice and mentoring over the past 12 years. She has made Sheen Lions into a beacon of excellence.

I cannot express how proud I am this team. They have been patient, worked hard and given full commitment and dedication to each other and their manager John O’Brien and now they have achieved the very best.

They are deserved winners of the U18s Premier Division. This is truly a testament to them and the Club. It’s about the journey and not instant success. Boys have come and gone over the years but many have been with the team through good times and bad, some of them for as long as 12 years. They are an inspiration.

I hope that they will take good memories with them of their time with Sheen Lions.

Winning the West Surrey Youth League in their final season – what a truly fantastic achievement.

I am delighted for John O’Brien , the Under 18 squad and all the parents that have supported this side since it commenced nearly 12 years ago. It is a fitting climax to an extraordinary adventure that will live with the boys for many years. Winning Football titles is important but what is more important is the shared experience and mutual friendships that the boys will enjoy as they progress into the next stages of their lives.

WELL DONE to ALL , you ALL really deserve the success you have achieved for yourselves and the club. 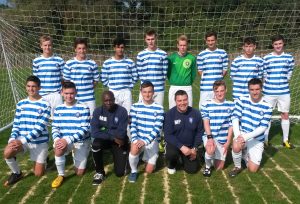