A brave battling performance from Sheen Lions in the U14 Surrey League Cup Final on Wednesday evening under floodlights at Carshalton Athletic ground but there was no shock result.

AFC Wimbledon are an academy class side so this was a tough game for Sheen. Last year as U13s Wimbledon were English Champions and are unbeatable at Surrey League level this season; they have only lost to one academy side in a full set of fixtures. Once Wimbledon settled Sheen were allowed very little time on the ball and found it very difficult to win the tackles. Despite the pressure Sheen stayed in the game and had more chances to score. Just before half time our forty goal plus striker, Dan had to come with an injury and two minutes into time added on Wimbledon took advantage of a slight hesitation to score at a critical time.

Starting the second half with a lead allowed Wimbledon to relax and they quickly added two more goals when they robbed the ball and rushed forward to score with a clever finish and then with a great header. The cup was won but Sheen kept going and defended strongly to contain Wimbledon for the remaining 25 minutes.

Congratulations to AFC Wimbledon, they are a fantastic side and deserved winners.

After the game our U14 manager Geoff Parmiter said”

WELL DONE to all the squad. I was really pleased that all 15 boys had a good run out and hopefully got the taste of what a Cup Final is really like. Once you get the appetite for Cup Finals , you simply want more and now it is up to us to make sure we win it next year. All I ever ask is that the squad give me their very best and last night looking at the grimaces on their faces I knew in my heart that they really had. Michael, Mark and myself were very proud of you.


A BIG BIG Thanks to everyone that made the effort and supported us last night. I know Sheen Lions v AFC Wimbledon at Carshalton (and an entry fee of £3) versus Barcelona v Real Madrid is a tough call but I was delighted to see so many coaches, managers and parents associated with the club. Cup Finals are about occasions and as supporters you all made it that bit special for the boys. Hopefully you all took something from watching AFC Wimbledon (I certainly do every time I watch them) as they are everything we all aspire to in Youth football. 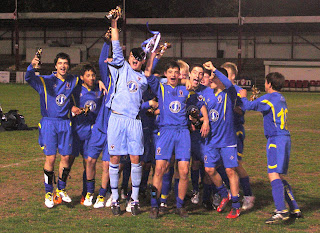