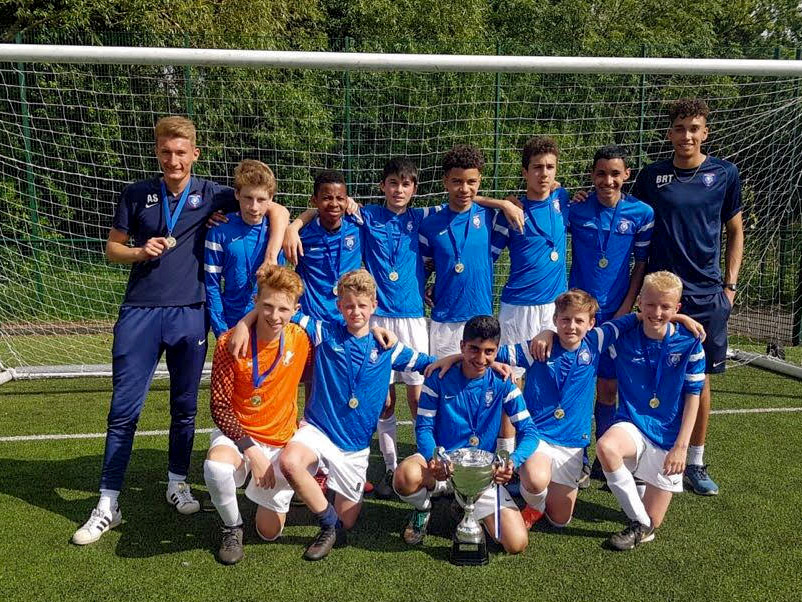 Well done to the Sheen Lions U14 team won the Worcester Park Cup on Saturday 10th June in convincing style. Twenty two teams competed in a European Championship style format with the winners of a group stage qualifying for a knockout.

The Lions won their group with three wins despite having lost their final group game 1-0 after loosing their goal keeper just before the game. So they were playing 11 – a – side football on a full sized pitch; with 11 players, no substitutes and no “recognised” goalie.

For the semi final Liam stepped up to keep goal and with 5 minutes training managed to keep clean sheets in the semi final and final won by the Lions 1-0 and 2-0.

A few words on the team from the anonymous reporter: Tom was cool as a cucumber in goal; Nathanael was a one (his only) match wonder; Liam, as discussed, literally played all over the park; Leon (tackling like a lion) and Charlie (confident as Cahill) were immense at the heart of the defence; Ollie found his “niche” as right wing back; Shahryar his usual inspirational self at left wing back; Lucas and Matt both immaculate, whether playing individually as a sweeper behind the defence in the 9-a-side format, or playing in tandem as a “dynamic duo” in front of the defence in the semi-final and final. Thomas and Harvey were a “Potteresque pair”, weaving their magic in attacking midfield with Theo the 3rd “midfield musketeer”: ruthless in front of goal, the penalty he won in the final sealed the victory.

The last word however must go to Dylan. Banksy’s Dad gave everyone “alter egos” before the tournament started and Dylan’s was Diego Costa. There are clear similarities: he intimidates opponents with his size and aggression, his finishing is clinical and (according to his Mum) he can get angry. Whilst we did not see any signs of anger, we did see two differences: firstly he is a real team player, harrying the opposition at all times, and secondly he is frighteningly quick.

So there you have it: the season finished with a big piece of silverware and apart from thanking Bruno, on behalf of everyone, for his inspirational coaching it was good to see him already getting excited about the prospects for next season!