No Football Weekend of 3rd and 4th March

Having beaten one team from the league above in the Quarter Finals, the under 10 Pride drew the favourites in the semi finals.  Walton & Hersham had already played well against the Pride  in a Festival Match.

Coach Craig had worked the game plan out on the training ground using his beloved Liverpool’s high pressing game. Could the boys deliver?  Determination and strong tackling kept Walton at bay before the Pride scored two quick goals. Walton hit back immediately and thought they were level on the stroke of half time but goalkeeper Davide produced a remarkable double save.

The second half was frantic with the Pride soaking up pressure and hitting Walton on the break. A fierce drive from distance gave the Pride a 3-1 lead and they scored twice more as Walton threw everyone forward. A quite outstanding team effort and a great game from both teams.

Now for the final v Mayford Tigers on the 18th March. 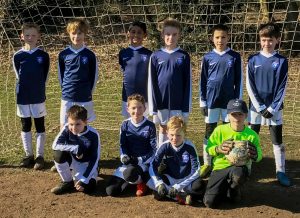