An entertaining game split into four quarters. Sheen dominated the first quarter . Barnes battled well and fought their way back into the game and tested Sheen who matched them. There were some pretty physical but fair tackles made by both teams with the game played in great spirit which was great to see.

There was some great passing & individual skill on show from both teams but there wasn’t a great deal of chances for either team in the later stages of the game. 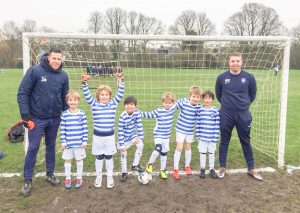