The Sun is shining but not on the pitch – 2nd Oct

With a full fixture list at Palewell Park today , Sarah invited Frank Thompson , General Secretary of the SYL to come down and take a look at our new facilities. Frank has been a great support to the club and was one of the key drivers behind the introduction of 9 v 9 football. He was extremely complimentary about the club and made a number of observations worth sharing:
(1) How great it was to see the 7v7 , 9v9 and 11v11 pitches together
(2) The wonderful sight of blue and white hoops across the spectrum of 6 pitches
(3 ) How he had noticed how much progress had been made in the quality of performance on the pitch.

The COACHES and you the MANAGERS and ASSISTANT deserve great credit for this. And now you have a cupboard for your nets as well. Thanks to Sarah again.

However, what Frank could not have predicted was the fantastic set of results for the day. It was a mixture of League fixtures, County Cup and Invitation Cup today. 18 games played , 12 victories , 2 draws and only 4 narrow defeats, particularly the U18s who were unlucky to lose AET 2-1 in their invitation cup. There were also more hat-tricks today than in a Tommy Cooper stand up routine.

I will try and sum up the victories, which is particularly hard as there were some outstanding results.
Starting with the new Under 8’s managed by Julian Groves delivering a great 6-0 versus Twickenham . They are looking very strong and we will now have two competitive Under 8 sides within a couple of weeks. I was also delighted with both Under 9 results. Gavin and Nicks Under 9 Prides recording their second win of the season and Nidal’s Under 9 Lions scoring two late goals to secure a 3-3 draw.

One of the great results of the day was Martin and Michael’s Under 10 Lions securing a 2-1 win over table topping Old Isleworth Reds, although the Under 10 Pride lost their 3 match winning streak with a very narrow defeat.

David continued his 100% record with the Under 11 Pride with another victory. Jon’s and Alastair’s Under 11 Lions playing in a tough Premier League will take some encouragement from a narrow defeat to the league leaders Staines , who retained their 100% record.

The results in the 12’s, 13’s 14’s and 15’s were outstanding with EVERY team winning. Mel continues to ride high in the league with a 4-1 victory and I don’t think Bernie will have celebrated many better birthdays with a remarkable 13-1 victory at Epsom and Ewell. In this game 3 boys netted hat-tricks. HAPPY BIRTHDAY Bernie. Yet this was not the biggest win of the day! Well done also to JACK N who has now got 8 goals in the league and cup and heads the Sheen Lions Golden Boot.

Matthew and Russell’s Under 13 Pride had a remarkable 4-3 win at KPR to win the big local derby and go second in the their table. Rick’s Under 14’s have also turned things around with a 3-0 victory at Corinthian Casuals and are beginning to look at the top 3. These are two sides that have really made a step change from last season. WELL DONE to both.

Last weeks TEAM OF THE WEEK , Trevor’s Under 14 Lions played in the County Cup and won 18-1 v Frimley. IF Trevor could have remembered the scorers I might have considered him as a candidate for this weeks honour! The boys tell me there were at least three hat-tricks in this match.

Michael and Mark’s Under 15 Lions had an impressive 3-0 victory v Spelthorne in the Premier Elite to move into second place. Unfortunately Matt’s U16 Pride lost their unbeaten record in their Premier Elite to a very strong Bracknell side and Brian almost snatched victory for his Under 16 Lions but a late equalizer left the game all square at 2-2.

So who is TEAM OF THE WEEK. Well the Cup is normally the place for excitement and this week the Under 13 and Under 15 Invitation Cup’s witnessed two incredible games that will be remembered for a very long time.

Dean and Sam Under 15 Pride faced Div 1 League Leaders Farnborough who had thrashed them 8-2 only two weeks ago. With much thought at training they had devised a plan to try to contain the threats. At half – time they were 3-1 down but an incredible second half performance and a great free kick with only minutes remaining secured a place in the quarter final with a 4-3 victory.

Terry’s Under 13 Lions side faced kew Association Colts in their Invitation cup tie . 4-1 down a half time and 5-2 down in the second half, it all looked lost. Somehow the extraordinary Sheen Lions spirit kicked in and one by one goals were recovered until they recorded an incredible 6-5 victory. What can I say. Brilliant. It is Whitton now in the quarter Final.

Two extraordinary performances and as such I have awarded both the Under 15 Pride and the Under 13 Lions with the honor of JOINT TEAM OF THE WEEK.

Don’t forget your team photos for the Sheen Lions website and keep up the good work. 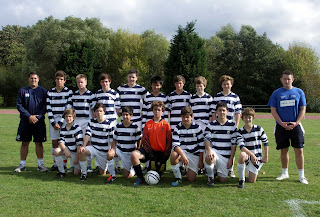 Joint Team Of The Week
U15 Pride

Joint Team Of The Week
U13 Lions