Up For The Cup – 25th September

The Sun is shining but not on the pitch – 2nd Oct

A freak October weekend for weather but unfortunately the results were not quite as sunny as previous weeks. Six wins and two draws from 16 games meant we lost 50% of our games today. Saying that , there were some great results with the Under 16 age group leading the way with two great victories for Matt and Brian’s teams respectively. Mel’s Under 12s had the biggest win of the day with a 9-1 victory at Molesey Juniors and David L’s Under 10 Pride delivered its third win in a row. This is a team that could not find a single win last season. David H’s Under 11 Pride had an impressive 3-2 away win at a strong Old Isleworth team which retains their 100% start in their 9 v 9 league. Three teams still hold a 100% start – Terry’s 13 Lions and Trevor’s 14 Lions as well . Unfortunately, last weeks team of the week – John O’Brien’s Under 18’s lost their unbeaten record this week.

TEAM OF THE WEEK must be Trevor’s Under 14 Lions . With a depleted squad, due to late injuries, meant that they were only able to put 9 players on the field. Despite this, the 9 boys came back from 2-1 down to beat Mitcham Park Colts 5-2 and go top of their Under 14 League. WELL DONE. Rory Jones and Alex Griggs of the Under 14’s also lead the scoring stakes with 7 goals a piece. this season.

Let’s try and get all the new team photos up on www.sheenlions.com website over the next couple of weeks. 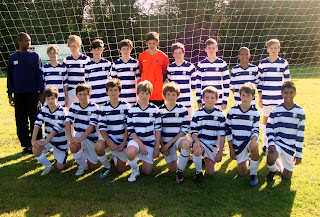 Team Of The Week
Sheen Lions U14