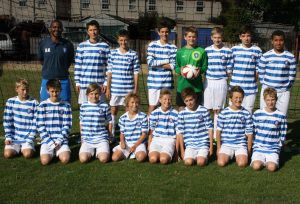 The awards just keep coming for our U14 age group this season. Already runners up in the championship division  and with many of the age group in the Ibstock squad that won the English Small Schools national cup they were given the Under 14 Sportsmanship Award at last night’s Surrey Youth League AGM.

It is fantastic that, not only have they played football to such a good standard this season but they are acknowledged to have played it in a sporting manner. The award is decided on the votes of all the teams the boys play against in the league so they are a great credit to Sheen Lions.