International Call Up For Sheen Lion

A fantastic start to the season on Sunday when Sheen Lions Pride U15 won the Richmond Cup with a last minute winner against Moormead. 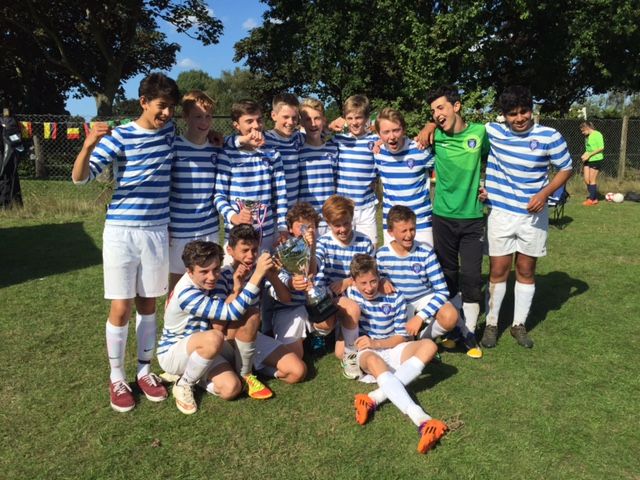 Sheen did not get off to the best of starts against a strong Kew Park Rangers Reds side, conceding a goal in the first minute, needing a goal line clearance and then grabbing a last minute equaliser when the keeper failed to hold a free-kick from Luke and Jason pounced to grab the equaliser from close range.

In their second game Sheen had to better the Red’s score of 4-0 against KPR Royals to reach the final. Dan got the first following a run on the left following which Sheen came close a couple of times at which point we thought it might be a frustrating outcome. However, Shahin’s magical free-kick from not too far from half-way never looked anywhere other than the top of the net and this gave the boys the confidence to go on and finish the job. Further goals from Ben, Luke and Jason sealed the outcome with time to spare and the clean sheet never looked in doubt with a solid performance at the other end. The 0-5 win took Sheen to the final.

The final against Moormead, a strong side who had won both of their group games, was an excellent, competitive game of football. The match was quite even in the early exchanges, but in the middle of the game Sheen came under an intense period of pressure that Joe and the defence coped with brilliantly, getting to the ball first and putting their bodies on the line to keep the ball out, notably from a number of dangerous long throws. Moormead’s closest effort hit the post but Sheen were also creating chances at the other end, notably another long range effort from Shah that was not far over. Again Sheen got stronger towards the end and the match were inside the final minute when Sheen crafted a goal, with Luke latching onto Dan’s ball upfield to lob the keeper, with the ball seeming to take an age to cross the line. Sheen then stood as firm for the final seconds as we had throughout and the cup was theirs.

A superb team effort all round with keeper, defence, midfield and attack all playing their part in a great success.