Team Of The Week – 16th October

Team Of The Week – 30th November

Team Of The Week – 23rd October

Only 3 games played on Sunday but still some good performances. Dean and Sam’s Under 15 Pride came back from behind to beat Kingstonian’s 2-1 with two late goals to register their first league win of the season. Last season they were promoted up to Div 1 so it was an important confidence boost for the team.

Matt’s Under 16’s Pride faced a high flying Grayshott team and conceded an early goal which led to a 2-0 defeat in the Premier Elite.

TEAM OF THE WEEK were the Under 18’s who recorded a convincing 8-3 victory v Junior Bees with some tremendous goals and move into the top 3 in the Under 18 division 1.

Hopefully a bit more football on Sunday. However, this week 32 boys from the Under 14s and Under 15s will play at the Chelsea training facilities in Cobham as part of the Chelsea Foundation Course. We are also proud to see one of our young coaches Dean Steninger employed now full time by Chelsea F.C. 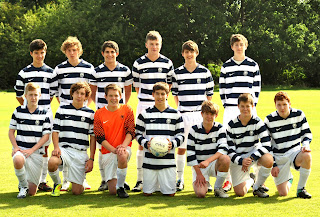 Team Of The Week
Sheen Lions U18