Team Of The Week – 23rd October

Progress In The Cups – 6th November

Team Of The Week – 30th November

It may be a week to go until fireworks , but there were some sparkling performances today. 15 games played with 7 wins and 1 draw.

The Under 14’s and Under 12’s led the way with two victories apiece. Trevor’s Under 14 Lions maintained their 100% start with a 5-1 win at Worcester Park and Ricks Under 14 Pride won 3-1 in an entertaining game at Manorcroft Utd. These two sides have been transformed since last season. The same can be said of Bernie’s Under 12 Pride who beat Whitton 4-1.

Mel’s Under 12s Lions have carried forward last seasons good form and are pushing towards the top of the Championship after a 2-1 win at Rushmore. Julian and Jason’s Under 8’s maintained their impressive start with another close game, which is quite unusual for this age group.

Nidal’s Under 9 Lions were not to be undone and also secured an impressive 0-0 draw with high flying Meadow Sports. Whilst David’s Under 11 Pride unfortunately lost their 100% start with a very narrow 3-2 defeat at Moormead, they still sit joint top of their league.

A BIG CONGRATULATIONS to Martin and Michael’s Under 10 Lions who have gone top of their Premier league following a 3-0 win at Roehampton Rangers. The prolific Sylvester J scored a hat-trick in this game.

After securing their first league win last weekend, Dean and Sam’s U15 Pride continued their theme of exciting matches with a late winner in a 3-2 victory over Worcester Park. Michael’s Under 15s faced Leatherhead FC the run away leaders of the Premier Elite but were just caught short in a narrow 2-1 defeat.

My TEAM OF THE WEEK is Brian’s Under 16 Lions. How encouraging it is to see them score 8 goals in an 8-3 victory at Claygate Royals. Jake L managed the second hat-trick of the day in this match. WELL DONE to them.

So this weekend we saw the end of the BST , with the clocks going back. Let’s just hope for a better winter than last year and some more good news in the Cup competitions over the next couple of weeks. 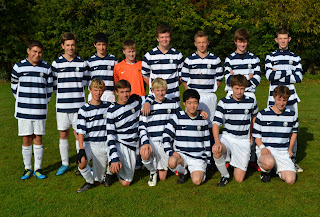 Team Of The Week
U16 Lions